Trypsinogen, the proenzyme (zymogen) form of trypsin, is produced in the acinar exocrine cells  of the pancreas. Three isoforms are excreted from the human pancreas. The cationic and anionic  forms are the predominant human isoforms. The inhibitor-resistant mesotrypsinogen is found only  in trace amounts.The proenzyme is activated only after it reaches the lumen of the small intestine. Enterokinase activates pancreatic trypsinogen to trypsin by the hydrolysis of a hexapeptide(for  bovine trypsin at the Lys - Ile peptide bond) from the NH2 terminus. Bovine trypsinogen consists  of a single polypeptide chain of 229 amino acids and is cross linked by six disulfide bridges. Trypsin

can autocatalytically activate more trypsinogen to trypsin. Trypsin consists of a single chain polypeptide  of 223 amino acid residues. This native form of trypsin is refered to as β-trypsin. Autolysis of β-trypsin (which is cleaved at Lys- Ser in the bovine sequence) results in α-trypsin which is held together by disulfide bridges. Trypsin is a member of the serine protease S1 family. The active site amino acid residues of trypsin include His and Ser Trypsin is a member of the serine protease family. Trypsin cleaves peptides on the C-terminal end

of lysine and arginine amino acid residues. The optimum pH of trypsin is pH 7 - 10. The enzyme is inhibited by serine protease inhibitors, e.g. PMSF and by metal chelating agents, e.g.EDTA.

Recombinant Porcine Trypsin is a genetically engineered protein expressed in E.coli and purified

by high pressure liquid chromatography. There are no contaminating enzyme activities such as carboxypeptidase A and chymotrypsin. No protease inhibitors such as PMSF are contained in the preparation. 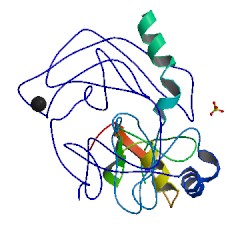 Appearance: White or off white, or yellowish powder